Allerton Bywater is a semi-rural village and civil parish in the south-east of City of Leeds metropolitan borough in West Yorkshire, England. The village itself is 2 miles (3.2 km) north of Castleford and lies in the WF10 Castleford postcode area. The River Aire flows through the village to the south-west. The village is well placed for access to all motorways M1, M62 and the A1. There is also a good bus service and a railway station in Castleford 2 miles away. We have a Primary School and a High School both with good standards of education.

The village was formed around the coal mining industry which lasted over 100 years and most of the housing was built for the miners and their families. Allerton Bywater is built up of several smaller areas, mainly based around old mining sites  including: Brigshaw, Hollinhurst, Westfields and Bowers Row

Businesses in the village

The area is surrounded by nature reserves and has 2 fishing lakes.

We have a skateboard park, Multi use games area, crown green bowling club, rugby and football teams, cricket team, shooting club, a youth club, rainbows, brownies and scouts groups, childrens play grounds, fishing club, narrowboats are welcome to moor up at the Staithes on the river, there are plenty of walking and cycling paths in the area and nature reserves, we also have horse riding within 1 mile of the village at Astley plus various dance classes at Great Preston 3/4 of a mile away.

Since the closure of the colliery in 1992 some like minded people campaigned for a Parish Council which was set up and since then have worked tirelessly to improve the village in many ways. We have lots of residents who commute to the larger towns and cities around us.

History of the village 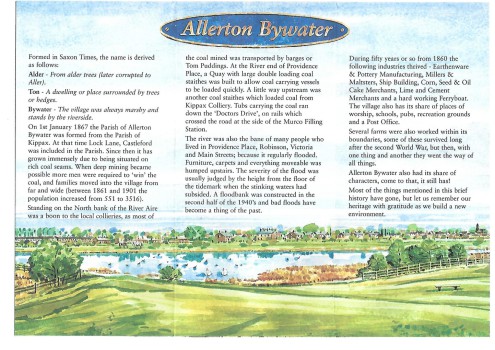 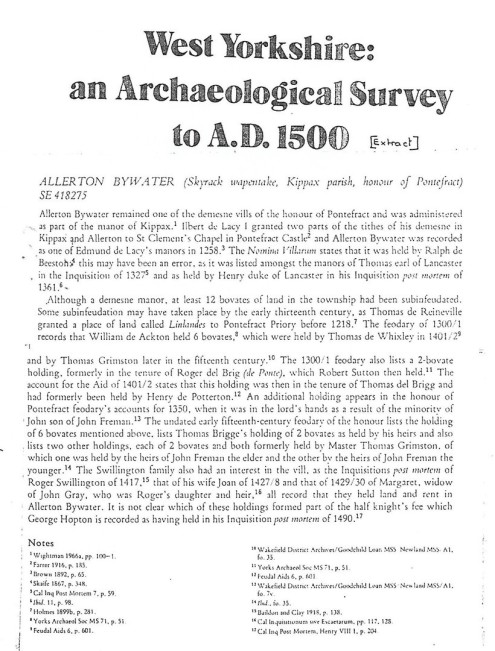 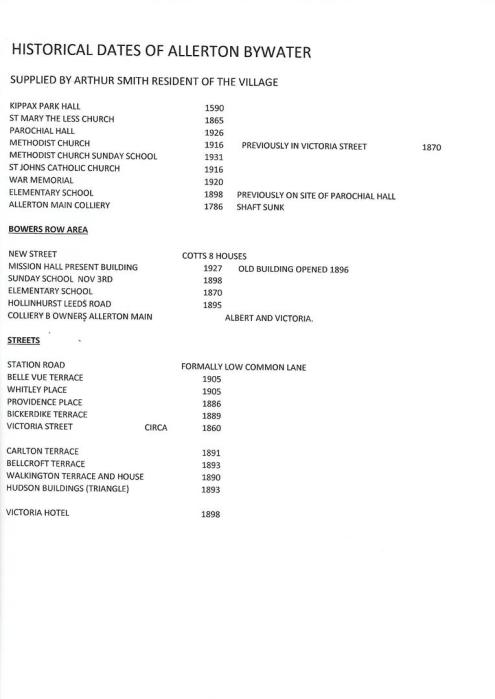 The Past - Extract taken from Kelly's 1867 directory

Allerton Bywater is a parish, village and township, half a mile from Castleford railway station, on the North Bank of the River Aire, in the Northern Division of the Riding, lower division of the wapentake of Skyrack, honor of Pontefract, Gilbert .uUnion of Great Preston, Pontefract county court district, Wakefield rural deanery, archdeaconry of Craven, and diocese of Ripon, and is much noted for its excellent beds of coal, called the Allerton Main. Messers Carter and Co., Messers Bowers and Sons, and Messers Locke and Co. work several pits here; there is also an excellent bed of potter's clay. Shipbuilding is also carried on by Mr. R.Cliffe. The church of St. Mary the Less is a fine stone building, in the Early English stlye, having nave, chancel, vestry on the north, south poarch, and open stone belfry, containing 1 bell: It was concsecrated in 1865, and erected at a cost of about £2500, defrayed by subscription. The living is a perpetual curacy, in the gift of the vicar of Kippax, and held by the Rev. Edward Winterbottom, M.A., of the manor and principal landowner. The soil is clay and alluvial; subsoil, clay. The chief crops are wheat and beans, but a great portion of the land is rich grazing. The population in 1861 was 704, and the area is 870 acres.

Letters from Leeds via Castleford, which is also the nearest money order office.